On 29 – 30 May, State Secretary Volodymyr Bondarenko and the delegation of the Ukrainian State Agency for e-Governance participated at the Tallinn e-Governance Conference to share achievements and lessons learned in conducting reforms and implementing e-governance, and to find inspiration for further developments in e-governance

In the EU Eastern Partnership track, the State Secretary Volodymyr Bondarenko gave an overview of Ukrainian reforms and European support (see video here). In the next presentation, Oleksandr Danchenko, Head of the Parliament Committee, Oleksandr Ryzhenko, Head of the Ukrainian State Agency for e-Governance and Mari Pedak, EGOV4UKRAINE Team Leader introduced the most significant developments in the digital transformation of the country last year: the launch of the e-government backbone, the data exchange system Trembita, and IT support for local governments (hromadas) providing public services hassle-free at ASCs and online (see video here). Both developments are conducted within the U-LEAD support project EGOV4UKRAINE.

Head of the Support Group Ukraine, Peter Wagner, outlined three main areas where Ukraine would benefit from e-governance. First, the crucial role that e-governance can play in contributing to fighting corruption in Ukraine. Secondly, the improvement of overall transparency in the country, that will be a game changer in the culture of interaction between the citizen and the government. And third, the potential to contribute to overall economic growth by bringing the government closer to businesses and significantly reducing the costs of doing business.

During the second day, the State Secretary of the Cabinet of Ministers of Ukraine Volodymyr Bondarenko met Estonian State Secretary Heiki Loot, who introduced a paperless cabinet meeting at the Estonian Government and the information systems that are used in the Estonian Government Office for more efficient governance. Bondarenko was especially interested in the structure of the information system for draft laws, since the system is under construction in Ukraine right now.

According to Hannes Astok, the Deputy Director of e-Governance Academy, the agency has achieved a lot together with national and international partners during its four years of activities. “The Agency has built a strong and capable organisation for leading the digital transformation in Ukraine, updated legislation and launched the backbone of the e-government – a secure data exchange solution based on X-road, named Trembita. Keep up the good work!” enthused Astok.

According to Oleksandr Ryzhenko, the award is a huge recognition for the agency and motivates them to continue the digital transformation of the country. “Ukraine is implementing huge reforms that need the support of ICT to be put in force. We are glad to cooperate with all of our supporters to make governance in Ukraine more efficient and transparent,” said Ryzhenko. 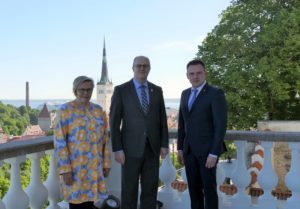 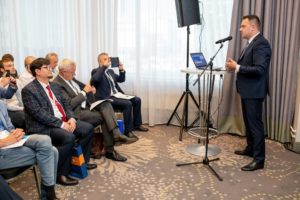 Volodymyr Bondarenko, the State Secretary of the Cabinet of Ministers of Ukraine. Photocredits: EGOV4UKRAINE